Though the chemical reaction of the fine particles of limestone in cement paste is limited to a low extent due to its inert property, the addition of limestone particles has significant effect on the microstructure development. Research conducted by Sellevold et al. using mercury intrusion method showed that specimens containing 12% CaCO3, which have the main body of the particles smaller than 0.1 µm had finer pore structure and somewhat reduced total pore volume.

They attribute this observation to the nucleation effect: The introduction of a large number of nucleation sites could result in a more homogeneous distribution of calcium silicate hydrate and thus a less open pore structure. The effect appears to be in the capillary pore structure rather than in the gel pores. The size and distribution of CH are also influenced by the presence of limestone.

In a limestone-filled paste which used 25% limestone larger regions of calcium hydroxide were unevenly distributed throughout paste while in the case of Portland cement small regions calcium hydroxide were evenly distributed. Further investigation found that limestone added in amounts of 5% or 25% enhance the formation of hydration rims of calcium silicate hydrate surrounding C3S particles due to the accelerated hydration rate of C3S.

On the one hand, as the hydration process of cement proceeds, cement particles expand and get connect with each other to form a network, which result in strength gain; However, limestone particles do not expand during the whole hydration process due to its low reactivity, thus making the porosity of the former becomes lower than the latter one. 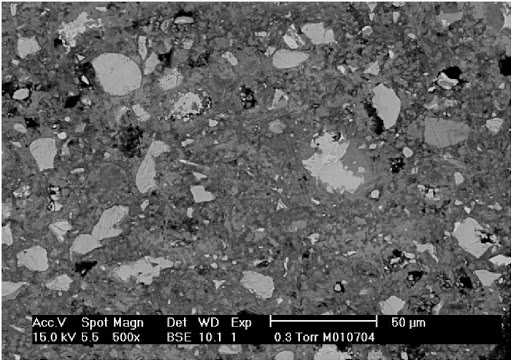 Research by Pipilikaki et al. showed that limestone used in blended cements changes hardened cements’ pore structure. The capillaries pore size is increased from 20 nm to 40 nm when the maximum amount (35%) of limestone that is allowed by EN 197-1. At the same time, the addition of limestone reduces the threshold diameter of the paste and presents a more uniform pore size distribution.

The author concluded that this behavior can be attributed to the better packing of particles due to the filling effect of the limestone powder, resulting in that chemical species enter the hardened cement more difficult but transport easier inside the cement paste due to the pores have approximately the same size. As gel pores are concerned, addition of limestone in cement produces smaller gel pores probably due to the accelerated hydration rates.

One reply on “Microstructure development of limestone blended cement”

Good morning
Kindly advise as to where can I find PDF of the following Conference Proceeding ?
Mbasha W, Haldenwang R and Masalova I. 2016. Effect of hydration on cement paste microstructure development. SCC 2016. Proceedings of the 8th international RILEM Symposium on Self-Compacting Concrete. Washington DC. US.